I just spent the most amazing weekend in Hamburg and I’d like to share my recommendations and tips with you. Mostly on what NOT to miss when in Hamburg. Let me take you on my virtual tour.

The ultimate hipster place: Schanzenviertel (Schanze District)
St.Pauli and the Reeperbahn district are undeniably Hamburg’s entertainment area number one. However, I didn’t even make it there. This trip wasn’t so much about going out and experiencing the night life, it was more about sightseeing and spending time with friends and family. The one evening we did go out, we went to the Schanzenviertel. To get there you take the U3 and get off at “Sternschanze“. “Schanze”as the Hamburg natives say is trendy, hip, in, back in the days the epitome of cheap apartments for students, it is now the center of the new economy, home to Hamburg’s creative and start-up scene.

You can find bars, coffee shops, fashion boutiques and basically anything there. The vibe is radiant and energy flow is high. But don’t expect anything fancy. Actually the more under-dressed you go the better it is. Understatement is the new thing.

It is also home to the left-wing scene in Hamburg. Graffiti, punks, 1st of May protests, occupied houses, vegan restaurants.. you can all find it there. 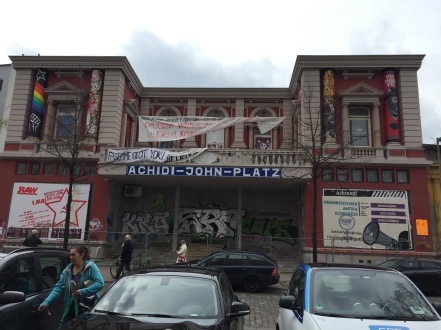 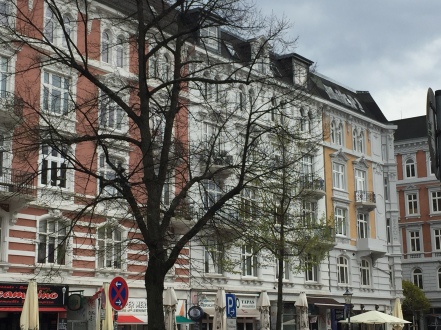 My opinion: I loved it there. I went there every morning to have breakfast, we went out at night, we strolled through the streets during the day. I won’t even give any recommendations for coffee shops etc.

Port of Hamburg
So, the port of Hamburg is one of the biggest  container ports in the world.. mmhh.. yep sounds fascinating – to some, not to me. Yet, it blew me away. We got off at “Landungsbrücken“-stop taking the U3 to start our harbor experience. The Landing Bridges is basically a floating dock where all the ferries, cruise liners etc. take off. As soon as the sun comes out the Landing Bridges are filled with people, Hamburg natives as well as masses of tourists. Some take the ferry, some are just there to have a bite to eat and something to drink. We took a ferry to Finkenwerder and back.. maybe 45 min all together for the round trip but a cruise well worth it. Back at the Landing Bridges, we went on to see the “Speicherstadt” ( a UNESCO World Heritage Site by the way – I am starting to collecting them in my bucket list).  There is one  specific picture I have seen a hundred times on Instagram and which I wanted to have to. Basically, this warehouse city (which would be the direct translation) was built only about 150 years ago when imports from across the world increased drastically, infrastructure (railway, streets etc) started to develop to transport all these goods to the rest of central Europe. 150 years is really nothing in terms of German history. From here we go to even newer districts.. “Hafencity” ( which basically means Habour City – Germans love their Anglicisms). A city basically built from scratch. Lots of modern apartment buildings, lots of office space occupied by a lot of well-known companies, some shops and restaurant, not a lot of people on the streets.. A district that needs to be populated. Pretty but empty. Just give it 150 years and it’ll be great!
From Hafencity you can also get to the infamous Elbphilharmonie. Hamburg’s pride or not so much pride. A concert hall or rather soon to be concert hall that has been all over the German media for not getting finished (the base was under monumental protection, so they built a modern top.. just to realize later on that the old base was not stable enough to carry the top.. so a new base was constructed with the top already finished.. and so the story continues).. German precision..

One of the most surreal experiences was the walk through the “Elbtunnel“. A tunnel built in the 1800’s for the workers to cross the River since their workplaces used to be on the other side of the river. The entrance building itself is impressive. The walk through the tunnel reminded me of a scene from “The waking dead”- Ghost town like. Maybe we were just lucky enough that when we were there no cars were allowed.

My Opinion: I simply loved the fresh sea breeze, the port flair, the architecture. I went there twice, once on a rainy misty day, then on a sunny, warm day. Both experiences were great. I wouldn’t even be able to tell you my preferences. I guess the misty rainy atmosphere fits the whole industrial look and feel of a habour.

Hamburg City Centre
Hamburg’s landmark is “The Michel” or St. Michaelis Church as its real name actually is. I have seen a couple of impressive churches around the world and The Michel is perhaps less impressive from the outside on an international benchmark but highly impressive from the inside. Recently renovated or restored it is an explosion of light inside. All kept in white and gold colours, it is not how most ancient churches in Europe look like (dark and grumpy).

After visiting “The Michel” we took a stroll back through the Portuguese Quarter to stop for a coffee. I guess it is called Portuguese Quarter simply because there are so many Portuguese coffee shops, restaurants ate.. Or there could be a more historic reason to it. At this point however, all I wanted was a coffee:-)

Next stop “Town Hall”. Quite a playful building from the outside. A lot of details to look at. A bit more simplistic yet not less impressive from the inside. We were lucky enough that my brother knew the guide who just had a group going through the Town Hall and we could stay with them for 2 stops. What we learnt in these 15 minutes was very interesting and I can highly recommend a guided tour through the Town Hall.

From Town Hall it’s just a few steps towards the “Alsterarkaden” which is home to a few coffee shops, some shops and above all, just stunning to look at or to walk through.

Across the street is the famous “Jungfernstieg” – they used to call it that because back in the good old golden ages young ladies (The old German word for them would be Jungfern) would go strolling there on sunny Sundays with their umbrellas.. to see and be seen. What else:-)

My Hamburg opinion: It is definitely one of Germany’s most beautiful places and definitely worth a visit. The weather can be temperamental but when it’s sunny it is most beautiful. The vibe is eclectic and contagious Hamburg offers something for everyone and anyone, the hipster to the yuppie.

P.S. Be prepared for a lot of walking.. the one day, we walked for 13.86km… just doing some sightseeing.

Follow Confessions of a Traveler on WordPress.com
Join 665 other subscribers